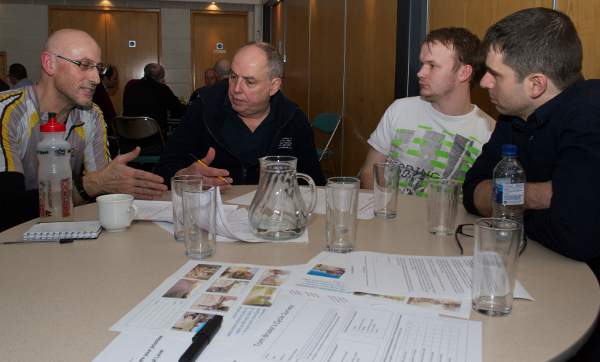 Sutton residents had the chance to debate cycling safety in the borough, as Carshalton and Wallington MP Tom Brake hosted Sutton’s first ever Cycling Safety Summit.

The Summit, discussing road safety and facilities for bike users, was held in Wallington on Wednesday 22 January. Over 60 cyclists from across the borough joined discussions and workshops on a number of bike-related topics including segregated bike lanes and dealing with potholes.

Those who attended had the chance to learn about Sutton Council’s plans to improve cycling facilities and share their cycling priorities. Councillor Stephen Fenwick talked about plans to improve the Wandle trail and incorporate cycling into all major traffic and development schemes. Caroline Pidgeon, Liberal Democrat member of the London Assembly highlighted Transport for London’s plans and her priorities for cycling.

The meeting also featured presentations by Charles Martin and Tom Bogdanowicz from the London Cycling Campaign.

Following the summit Tom Brake has appealed for cyclists in Sutton to take part in his online survey about improving the borough's roads and encouraging more people onto two-wheels. The results of the survey will be used to push Transport for London into action on bike safety. (Take part here)

Commenting on the meeting, Tom said: "I would like to thank everyone who took time to join our discussion about cycling in the borough. There were many valuable ideas and suggestions made on how to make Sutton a cycling-friendly borough where cycling would be safer, easier and more enjoyable for everyone."

"Any local cyclists who couldn't come along can still tell us what they think by taking a few minutes to respond to our online survey."

Cllr Stephen Fenwick said, “Making our roads safer for cyclists will benefit everybody, as it has the potential to reduce overcrowding on public transport, reduce traffic and promote healthy lifestyles. I want to work with local residents, police and the Council to make Sutton one of the top cycling boroughs in London.”

Caroline Pidgeon AM, Leader of the Liberal Democrat London Assembly Group commented: “Over many years Sutton Council has adopted a number of innovative policies to encourage sustainable transport including cycling. But there is still some way to go before cycling anywhere in London is as safe and attractive as it is in many cities in countries such as Holland and Denmark."

The cycling summit organised by Tom Brake and local Councillors is part of a process to ensure cyclists are properly heard and that provision is transformed in Sutton.