Give us back the Beddington X26 bus stop! 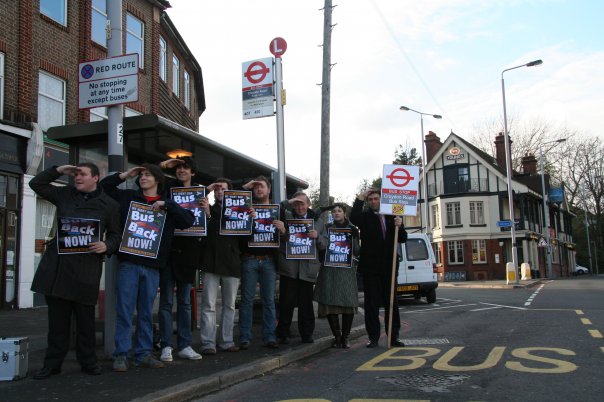 Caroline helped to launch the campaign with Tom Brake MP at the Plough in Beddington on Monday 24th November.

The 'Bus Back' campaign aims to reinstate the X26 bus stop at the Plough in Beddington. The X26 bus is an express service which goes on to Sutton, Kingston and then to Heathrow. In the other direction, it goes straight onto East Croydon and West Croydon Stations. The X26 used to stop for local residents in Beddington, but the service was streamlined some years ago with the bus now sailing past the Croydon Road stop by the Plough Pub.

"This is an important campaign for the people of Beddington" said Tom. "It is a huge inconvenience for residents to have to find alternative transport to get them to Carshalton or Wallington Green to join the X26 there."

"The decision to remove this service is senseless, especially as the route itself hasn't changed" said Caroline Pidgeon. "Whilst publicising the campaign in Beddington, we were passed numerous times by buses on the X26 route, but none stopped to help residents of Beddington on their journey across South London."

“I am also looking to find out what other concerns people have about the X26 route. For example, is there enough luggage space on the bus and is it frequent enough?” added Caroline.

Mr Brake has launched an online campaign to publicise the issue which includes video footage of the 'Bus Back' protest. His Facebook Group 'Bring Back Beddington's X26 Bus' is gathering new members on a daily basis. If you would like to support the campaign, you can do so by joining the Facebook group.