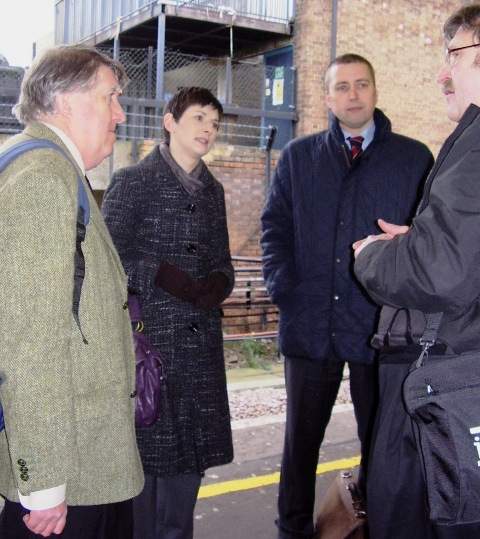 While London Mayor and Transport for London (TfL) Chair, Boris Johnson, refused to travel on the overcrowded, TfL-run, London Overground Barking–Gospel Oak rail service when invited by London Assembly Chair Jennette Arnold, Caroline Pidgeon, Liberal Democrat Vice-Chair of the London Assembly Transport Committee, was made of sterner stuff. She travelled with members of the Barking – Gospel Oak Line User Group (BGOLUG) on a crowded morning peak train from Barking last Friday (27th February) in order to see the overcrowded conditions for herself.

The Assembly’s Transport Committee has recently published its report, The Big Squeeze, into rail overcrowding in the capital, and BGOLUG had contributed to the Committee’s inquiry.

Caroline was amazed that Barking residents and commuters from connecting District Line and c2c Southend and Tilbury Line services were filling the trains before they left Barking station. Together with BGOLUG members, after watching the 7.40am train leave full with standing passengers, Caroline boarded the 8am train for Gospel Oak.

Caroline said, "The level of overcrowding on this line is simply shocking and I challenge any politician who thinks it is acceptable to take the same journey that I have!”

After calling at Woodgrange Park and Wanstead Park (Forest Gate) stations the train was uncomfortably full. But after Leytonstone High Road and Leyton Midland Road stations, crush loading prevailed through Walthamstow to the Blackhorse Road interchange with the Victoria Line. Even then train remained very full through South Tottenham (Seven Sisters) with many standing passengers when the party alighted at Harringay Green Lanes. The train still had to call at Crouch Hill and Upper Holloway (Archway) before arriving at the Gospel Oak interchange with the North London Line at the southern end of Hampstead Heath.

"What is most concerning is that in speaking to passengers many pointed out that the serious overcrowding I experienced was less than is normally the case on other days of the week,” Caroline continued.
“Caroline was surprised to see the trains departing Barking already full with standing passengers”, said BGOLUG Vice-Chair Bill Measure. “I told her that passengers at Leyton Midland Road station were at their wits' end struggling to board the packed trains and often being left behind. She was very concerned to learn that TfL Rail had failed to give any guarantee that new 2-car diesel trains, now expected in 2010, would have a third coach added. We also explained how we believed that TfL Rail could improve the current 20-minute peak period service by introducing a limited high-peak 15-minute frequency now instead of waiting for Network Rail’s re-signalling, which always seems to be slipping back over the horizon.”

"I really feel that TfL must ensure that extra carriages are provided as soon as possible and to sort out the electrification of this crucial line,” said Caroline.

“We explained to her that there was no commitment to electrify this, the only purely diesel line in north-east London, and asked for her help in ensuring that Lib Dem MPs signed the Early Day Motion in the House of Commons moved by Jeremy Corbyn MP calling for the line’s electrification,” said BGOLUG Secretary Richard Pout. “When the year-long rebuilding of the Stratford to Camden Road section of the North London Line starts later this year, more and more electric freight trains are going to be dragged over the Barking–Gospel Oak Line by diesel locomotives.”

Caroline added, "I am urging all London Lib Dem MPs to support the motion on this issue in Parliament."

Caroline then concluded her visit by boarding a later train through Crouch Hill and Upper Holloway to Gospel Oak and sampling the London Overground North London Line, also TfL-run, from there to Highbury & Islington, where she was to discuss with local councillors mobility access problems at the station. 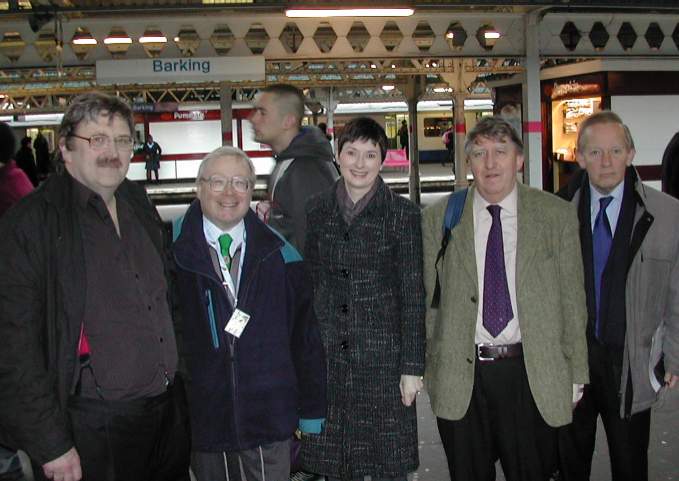