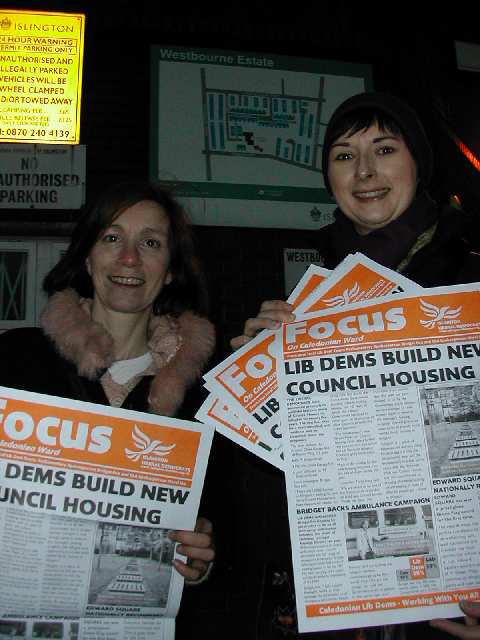 Caroline joined Lib Dem Parliamentary campaigner Bridget Fox in Islington early in January to deliver newsletters, highlighting the hard work of local Lib Dem councillors and some of the negative impact the Labour Government is having on the lives of many residents in Islington.

The impact of rising energy prices on the poorest families and pensioners is one such issue which was highlighted by new Lib Dem Leader Nick Clegg MP in his first Prime Minster’s questions. He asked the Prime Minister: ”With 25,000 people predicted to die this winter alone from the cold, I think we need a more specific commitment from the prime minister. Will he agree today to take action to stop the energy companies from hitting the poorest families with higher bills on pre-paid meters, so we can end the scandal of the poorest families paying the most for their energy needs?”

Last year Energywatch reported that energy companies are charging prepayment meter users an average of £195 extra each year for their gas and electricity compared to the best available deals. In the worst case, Npower, the gap between prepayment customers and internet customers in some parts of Britain is £304. Now we are told London gas users will have to pay around £45 more for gas a year than some other regions.

”Many London families depend on pre-paid meters. I hope that the Government can come up with some action to protect them. As a minimum, the prepay meter price should be equalised with the standard quarterly rate” commented Caroline.