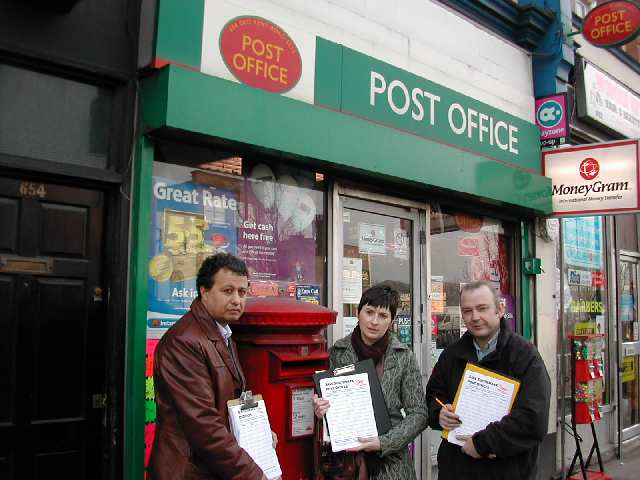 Post Office Ltd has announced that it is proposing to close branches all across Southwark, as well as the rest of South London. The Southwark post offices which face the axe are: Dockhead in Bermondsey; Ilderton Road in South Bermondsey; East Street and Maddock Way in Walworth; Nunhead; Peckham Road; the office at 654 Old Kent Road in SE15; and Melbourne Grove in East Dulwich.

North Southwark and Bermondsey MP Simon Hughes, Liberal Democrat GLA candidate for Lambeth and Southwark Cllr Caroline Pidgeon, and Liberal Democrat councillors across the borough started campaigning as the announcement was made on 19 February outside the threatened branches to rally local support against the closures. Simon, Caroline and other councillors will be regularly campaigning outside all threatened post offices in their area and elsewhere in the weeks ahead. They’re hoping that strong public opposition will force the post office to change their plans.

These plans are part of a national plan to close up to 2500 post offices, of which 169 threatened offices are in London. The local consultation begins today and will run until 2nd April.

Lambeth and Southwark GLA Liberal Democrat candidate Cllr Caroline Pidgeon added:
"Over the last few years Labour have followed the Conservatives in pursuing policies which have led to the closure of post office branches across Southwark and the rest of South London despite the protests of local residents. I'll be working with local residents to try to stop the loss of any more post offices in our area, where they provide a much needed service to local residents and businesses. "