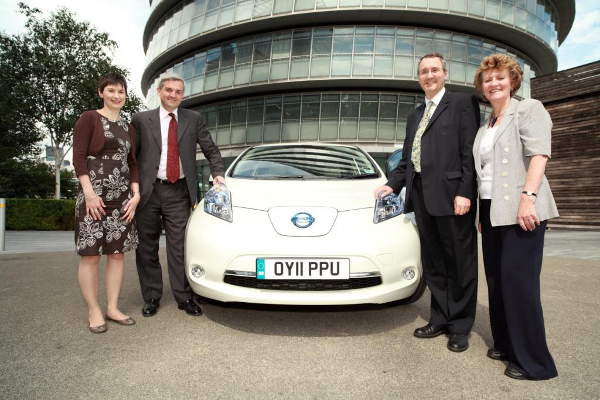 A Big Switch to electric buses and taxis can cut London’s appalling air pollution, dramatically reduce premature deaths and ill health, and help meet climate change targets. The London Assembly Liberal Democrats have put forward an ambitious programme to convert high mileage buses, taxis and light goods vehicles to electric power by 2020. The plan was launched with Caroline Pidgeon AM and Mike Tuffrey AM with support from the Secretary of State for Energy and Climate Change, Rt Hon Chris Huhne MP.

With electric vehicles emitting no exhaust pollution, turning London’s buses, taxis and commercial LGV fleets electric will reduce the air pollution suffered by Londoners by an estimated 25% - and even more in central London, with a 65% cut in dangerous nitrogen dioxide emissions in Oxford Street. Wider benefits include a reduction in CO2 emissions of over 300,000 tonnes, far quieter streets and cheaper running costs, helping make public transport more affordable.

Setting out why making the Big Switch is so important, Mike Tuffrey AM, the Liberal Democrat London Assembly environment spokesman, said:
“Electric cars are welcome, but bang for buck the biggest benefits come from electrifying the vehicles that clock up the most miles and generate the most pollution. Look at the facts and it is a no brainer that the top priority is to electrify buses, taxis and vans.”

Commenting on the current Mayor’s record, Mike Tuffrey said:
“It is time London caught up with best practice around the world. Turin and Genoa have had electric buses for many years and Seoul has announced plans that half of its public transport vehicles will be electric by 2020. In the UK, Durham already has electric buses on their roads. Why is London falling so far behind?

You can read the full plans here - and an article by Mike Tuffrey AM explaining the plans here on the Mayorwatch website.

Do feed back to us your comments on our plan - you can contact the Assembly Liberal Democrats here.