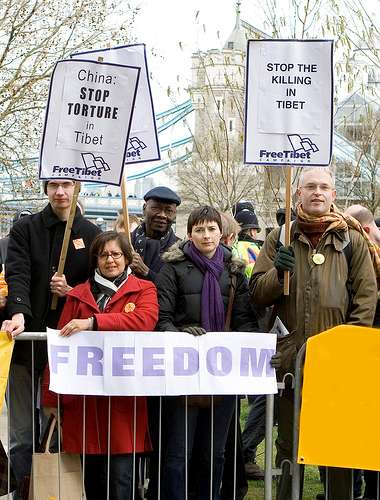 Southwark Liberal Democrats joined protestors at City Hall on Sunday as the Olympic torch passed through the borough to register their protest about the Chinese government's occupation of Tibet and their record on human rights.

Commenting, Cllr Nick Stanton, Lib Dem Leader of Southwark Council, said:
"The recent suppression of protests by the Tibetan people has highlighted the brutality of the regime and its poor record on human rights.

"As the host nation for the world's foremost sporting event, China needs to take drastic steps to improve its record on human rights in general and Tibet in particular."

Lib Dem GLA candidate for Lambeth and Southwark, Cllr Caroline Pidgeon added:
"As councillors and local residents we wanted to send a clear message to both the Chinese government and the authorities here in London and the UK that while we support the Olympic movement and the games coming to London in 2012, we should not condone the situation in Tibet."