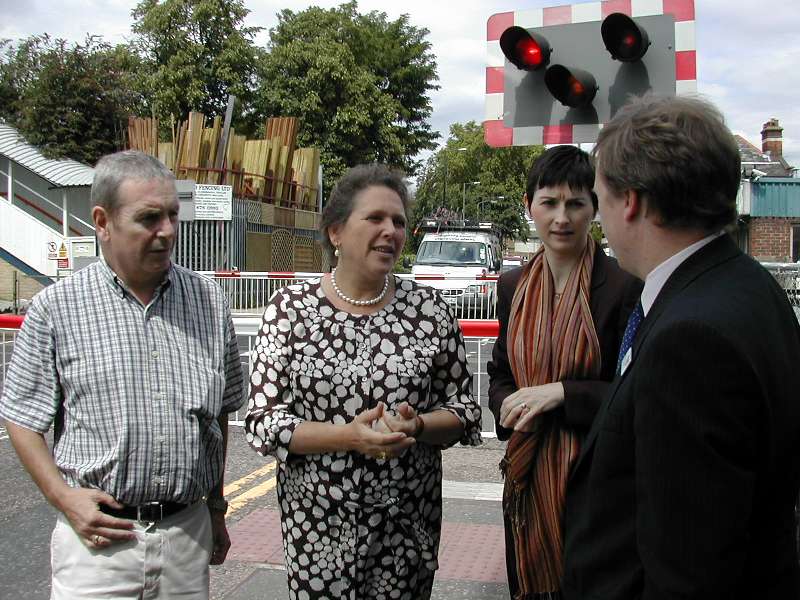 Commenting on the news that North Sheen rail station is to have its pedestrian footbridge restored by Network Rail so that it serves both sides of the Manor Road crossing, Assembly Member Caroline Pidgeon, the Liberal Democrat Transport spokesperson at the London Assembly, said:

"I am delighted to have been able to work with Susan Kramer and the local Lib Dem Councillors to get top rail people together in Richmond for a summit to thrash out the issues. This is great news for local people and will stop people risking their lives just to get a train.

Caroline recently held an action meeting at Vauxhall Cross with local Lib Dem Cllr Rob Banks and a representative from Viva Vauxhall Residents’ Association. Representatives from Transport for London (TfL), the police and the Public Carriage Office (PCO) attended to talk about the issue of taxi touting in the area and to come up with an action plan to try to tackle this nuisance and dangerous issue.

The following actions were agreed:

“It is staggering that schemes such as the Cross River Tram, the Croydon Tramlink Extension, East London Transit, Greenwich Waterfront Transit and plans for an Oxford street tram appear to have been scrapped with nothing in their place apart from, perhaps, a few more polluting diesel buses.

“There is much to welcome in Way To Go, but it is alarming that key projects like the Cross River Tram and DLR extensions are dismissed as ‘political’ when they have a strong business case and would regenerate disadvantaged communities at a time of economic downturn.

Commenting on the news that a total of 225 entries were received by the Mayor’s office in the competition to provide designs for a new Routemaster-style bus for London, Caroline Pidgeon AM, the Liberal Democrats’ transport spokesperson at the London Assembly, says: "It’s good the Mayor received so many entries but it’d be interesting to know how many are realistic, viable designs.

"But what worries me is when will the actual users of the buses, and indeed all of London’s road-users, ever get to have their say on the ideas?"

Caroline Pidgeon AM, the Liberal Democrats’ transport spokesperson at the London Assembly, says the Mayor, also the chair of Transport for London, is clearly not fully clued up on the capital’s transport issues.

Caroline says: “Mayor Johnson floundered when asked key questions of fact on whether London transport will be ready for the 2012 Olympics.

“He was clueless about TfL’s £40 million cutback on the North London Line at Camden Road station which will mean only six trains an hour to Stratford instead of eight.

Following a “summit” meeting with Network Rail, South West Trains and London Overground at Richmond’s Civic Centre, Caroline Pidgeon AM, the Liberal Democrats’ transport spokesperson at the London Assembly, says: “Richmond residents and traders have had to put up with endless delays and traffic queues for far too long. We need new solutions which’ll balance the needs of the rail commuters, who need a frequent service and longer trains, with the need to keep traffic moving.”