As the Court of Appeal ruled that the plan for a third runway at Heathrow is unlawful and breaches the Government's obligations to fight climate change, Caroline Pidgeon said:

In Caroline's latest newsletter, she discusses:

Writing for Liberal Democrat Voice, Caroline points out that the issues around the third runway at Heathrow have not been properly discussed, and that the campaign against it needs to go on.

Many of the arguments in favour are outdated, most notably the obsession with hub airports.

Caroline Pidgeon, Liberal Democrat London Assembly Member, commenting the today’s High Court ruling that the Government’s plan to tackle the UK’s air pollution is illegal - the second time in 18 months that the Government have lost in court on this issue - said:

“The Government is clearly failing to cut illegal levels of nitrogen dioxide in the ‘shortest possible time’.

"After an incredibly expensive lobbying campaign the Government has ‎foolishly accepted the myth that what is good for the overseas owners of Heathrow is also good for the UK economy.

"The reality is that airports such as Luton and Stansted have spare capacity. And in time HS2 will also allow easy access ‎to Birmingham airport for many Londoners.

"Londoners opposed to expansion are fed up of being lied to. A decision is needed now.

“Heathrow is not, and never will be, the place to expand airport capacity and the sooner this Tory government accepts that, the sooner we can get on with developing a sensible aviation policy for the UK."

In an article for the Huffington Post, taking on the arguments made in the intense lobbying by Heathrow's owners, Caroline Pidgeon writes:

Caroline Pidgeon AM, Leader of the Liberal Democrat London Assembly Group, commenting on the support for a third Heathrow runway by the Davies airport commission, said:

“This much delayed report simply repeats many outdated arguments in opting for a third Heathrow runway.

“However many conditions are set ultimately a third Heathrow runway will have devastating consequences for a large section of London in terms of noise and increased air pollution. 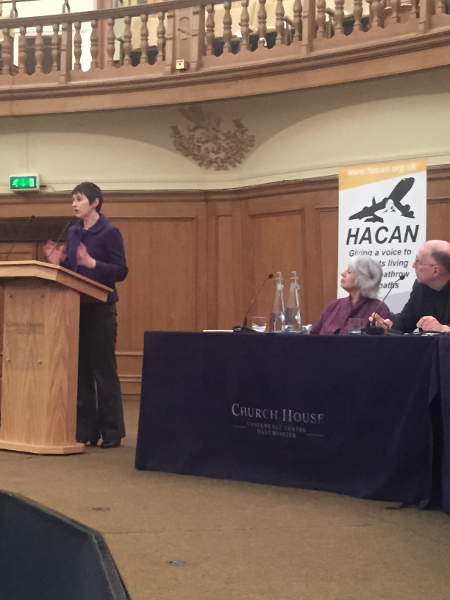 Caroline Pidgeon AM joined Vince Cable MP speaking at a rally organised by HACAN against expansion at Heathrow on Tuesday 3rd March.

"Given that there are 725,000 people affected by noise from Heathrow – no other airport in Europe comes close to this figure. AND a new runway would mean an additional 150,000 people under the flight path. It is simply unthinkable that a third runway could be built at Heathrow" commented Caroline.

Other key messages from Caroline's speech include:

"Existing capacity in the south east must be used more effectively. In summer 2012, 47% of runway slots at Stansted weren’t used, 51% at Luton, and 12% at Gatwick. Instead of a new runway at Heathrow, we should be prioritising improved rail links to the airports that already have spare capacity. It’s good to see that the line to Stansted will be four-tracked in the not too distant future."

"Even at Heathrow, though it is full, we know the terminals can handle a further 20 million passengers a year. Heathrow could look to shift to more long-haul flights or larger aircraft to increase passengers."

Despite opposition from the Conservatives, the London Assembly has voted to reaffirm its opposition to the expansion of Heathrow Airport and suggest that more use could be made of spare capacity at other airports serving the South East. It was reacting to the interim report published by Sir Howard Davies’ Airports Commission and the options proposed for expanding Heathrow and Gatwick.

Caroline Pidgeon AM, who proposed the motion, said: “I am really disappointed to see Heathrow back on the table. Airport capacity in London is currently under-used, in fact some London airports have more than half of their runway slots free. Rather than inflict further misery on the residents of West London, the Davies Commission should rule out expansion of Heathrow and focus on better use of capacity at other South East airports.”